Project includes Bagh Moozeh Defa Moghadas Building in about 40,000 Sq. Meters, Lake and Garden in an area of about 25 Hectares 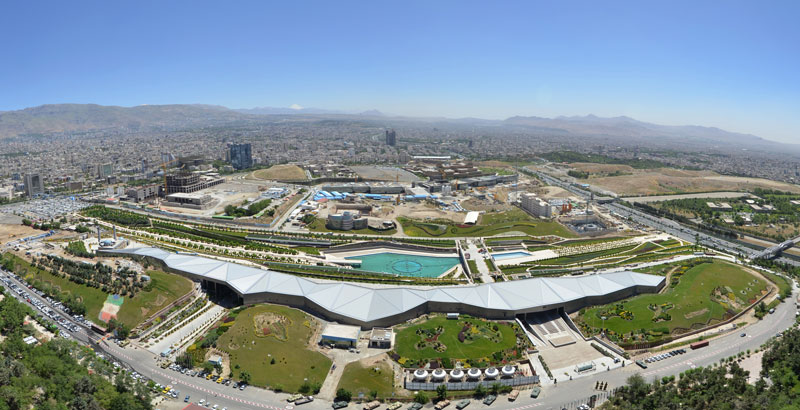 A: facility within the building (Garden Museum)

The center of heating and cooling energy supply in buildings as well as cold water and hot water distribution systems in central engine room which is located at the lowest level consists of the following devices:

The buildings in Garden Valley are designed independently in terms of heating, cooling and the warm water supply. Sewage collection network of the buildings, situated on the west and east sides of the compound collects the sewage from the buildings and sends it to the sewage treatment installation.

Irrigation of the green spaces in the compound is possible both manually and automatically. In the automatic irrigation system, visible and invisible sprinklers are in use.

A water treatment system is used for the storage and distribution of water for the irrigation of green spaces in the compound. Therefore the polluted supplied water is first treated and stored, and then is pumped for the use in irrigation.

The lake complex with a capacity of almost10000 cubic meter is equipped with a treatment facility on the side. In this water treatment facility sand filters are employed in which backwashing is conducted automatically with air compressors.

Electrical systems of Holy Defense Garden Museum project based on the latest standards and international regulations have been designed and implemented. These include the following

- The brightness of different spaces (internal or external), designed and executed according to IES standards and using the latest technology in manufacturing LED.

- Power distribution system consists 3 posts. The post number 1 (main post) which supplies the power to the main building of the museum, offices, ventilation chambers, motor chamber and other indoor spaces, includes 4 transformers, each with a capacity of 1600 kVA, plus two 700 kVA diesel generators. One of the transformers emergently supplies the sensitive loads. The system is designed and implemented in such a way that diesel generators supply the load, in case of error in one of the non-emergency transformers.

The second post consists of a 1600 kVA transformer plus a 630 kVA diesel generator, which supply the power to the garden valley, ancillary buildings in the compound, Lake Complex and its treatment facility.

The post number 3 includes an 800 kVA transformer and a 500 kVA diesel generator which supply the power to the central mosque of Khorramshahr, the mosque's compound, part of the northern site, treatment facilities, and pumping chamber. It is also supposed to supply the power to any future expansion in the compound.

The power system of the project is of TN-S design type. The main building structure is connected to the earthing network in the system. To protect the building against the lightning, electrical lightning rods was used along with different classes of type A and D secondary

Protectors in the panel boards.

- The fire alarm system is designed so that the electrical and mechanical systems are controlled or turned off according to pre-planned scenarios. This is mainly related to the ventilators, vents, positive pressure ventilators, lifts, ramps, and electric doors.

- The public spaces, the compound and the reserved spaces (amphitheater, restaurant, and so on) are equipped with AP system.

- Telephone is provided in environments where it is needed. There is a telephone center for the whole valley garden and the museum garden. Given the conditions in the area and the capacity of the telecommunication company, an optical fiber center is designed to provide the phone lines of the project and other projects in the area.

- The computer network of the project enjoys an advanced IT system, considering the conceptual section of the network and the halls of the museum. In addition, a data center is designed for the IT center of the project, based on the latest international standards.

- The museum garden of the project is equipped with a highly advanced intelligent system, which is the most comprehensive and the biggest BMS in Iran. With 15000 data (physical and virtual), the BSM system includes lighting systems of the public spaces, mechanical equipment’s (motor chamber, ventilators, unit packages, vents and so on) panel boards, transformers, diesel generators and other facilities. Fire alarm systems, CCTVs, and access control system are all combined in the BMS.

- Public spaces, sensitive sections and the compound are controlled by type IP CCVs.

- Exit and entrance from and into the sensitive and important spaces are controlled by access control system.

- Intelligent systems, computer network, CCTVs, and USP electricity are provided for the sensitive equipment of the IT department.